Story in 30 seconds: Saunders Construction is one of the largest and most respected commercial builders in the Rocky Mountain region. Since 1972, the company has built some of the area’s most notable landmarks, like the University of Colorado Boulder’s Center for Community (pictured here), while establishing a reputation for quality and on-time delivery. The company’s 440 employees specialize in construction for a wide range of industries including healthcare, industrial, retail, religious, education and government. They upgraded their systems and made scheduling a company-wide priority with Powerproject at its heart. 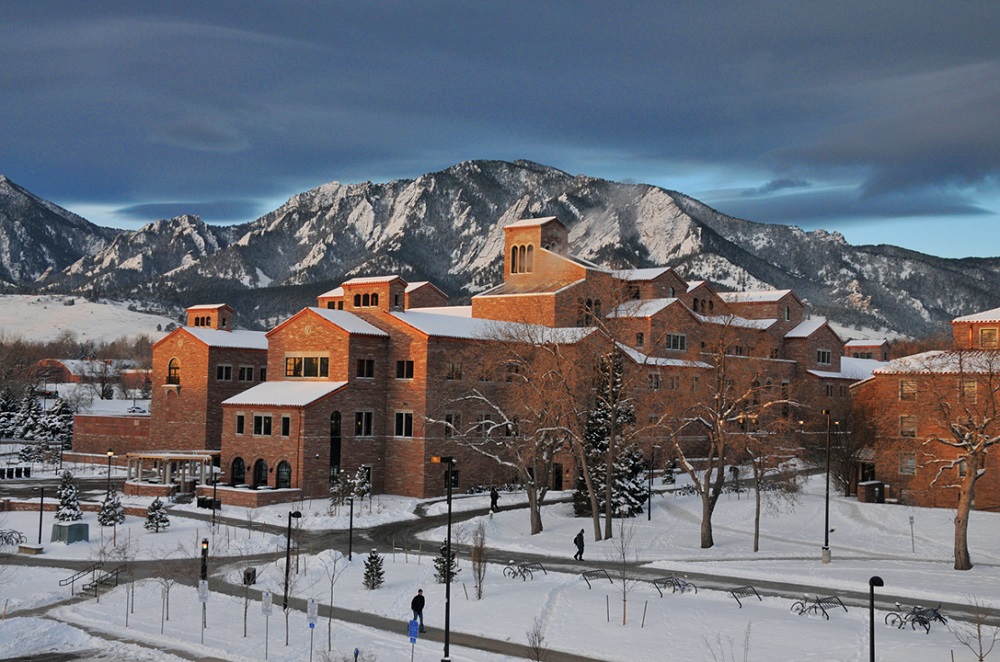 Colorado’s top commercial builder plans to stay that way
Saunders Construction is ranked by ENR Magazine as one of the largest general contractors in Colorado, USA with 440 staffers and annual billings topping $450 million. The company has steadily grown and taken on projects of increasing complexity since its founding in 1972.

Their clients come from a diverse mix of industries including healthcare, retail, manufacturing, religious, governmental, and K-12 and higher education. With an increasing number of complex
projects running simultaneously, a better, more systematic approach to scheduling was needed. The professionalizing of project scheduling at Saunders sought to reduce risk while increasing management visibility.

In 2013, the company hired a seasoned scheduling manager to oversee the transition. The new scheduling manager’s initial task was to find and standardize a new scheduling system. Saunders’ staffers were so frustrated with the outdated SureTrak system that many struggled to build formal project schedules. And many users needed the company’s IT staff to downgrade their computer’s operating system in order to allow SureTrak to run on new machines. A couple of copies of Primavera P6, purchased for a joint venture, sat unused due to its excessive complexity.

After a competitive search, the company purchased Powerproject from Project Integration, one of Elecosoft’s USA reseller partners, and chose the concurrent licensing option, providing shared licenses for all its superintendents, project managers, and project engineers.

“Powerproject is now used for every job – regardless of project size,” says Bill Jack

Daniel, scheduling manager at Saunders. “It’s a corporate initiative and it truly helps us better manage and track all jobs.”

Making the Switch to Powerproject
Saunders recognized that senior management buy-in and proper training would be critical if the new system were to be fully adopted. Company owners and senior management were heavily involved in
the ultimate selection process and in setting up guidelines for its use.

“With Powerproject we now have a very effective and efficient tool that is helping us achieve all of our goals of improved scheduling and planning throughout Saunders,” said company president Greg Schmidt.

Initially, four custom training classes were conducted by the local Elecosoft partner Project Integration. Additional support was provided by Project Integration to help Saunders develop their custom templates and license management. The system was so intuitive to use, most Saunders’ staffers in the training sessions were making schedules within a couple of hours. Daniel is also able to continue training future sets of users internally. The transition from Suretrak (or no scheduling at all) to Powerproject on every job was completed in 2013.

The Saunders team finds plenty to love about Powerproject
Impacts of adopting Powerproject were evident throughout the organization quickly. Saunders’ IT, accounting, and financial team appreciated the cost savings over other systems. Thanks to concurrent licensing, the scheduling software runs on 200 computers with only 30 licenses – a savings of more than $400,000 compared to Oracle Primavera, which does not offer concurrent licensing. Additionally, because it is intuitive to use, less time is spent training staff. And, there’s less IT department time needed for maintaining the system and the machines needed to run it. Project engineers and managers also reported high satisfaction with Powerproject for its simplicity but powerful functionality.

As one project superintendent said, “The tool is so easy, I actually use it!”

Finally, Saunders is able to deliver more accurate and real-time information to clients because they can build schedules much further in advance. Powerproject’s robust reporting tools paint a clear picture of the progress and remaining steps. Earlier communication helps avoid costly surprises late in the construction process.

Saunders has a goal to be a paperless company and also uses Powerproject’s Site Progress Mobile app for easy progress reporting from the jobsite.